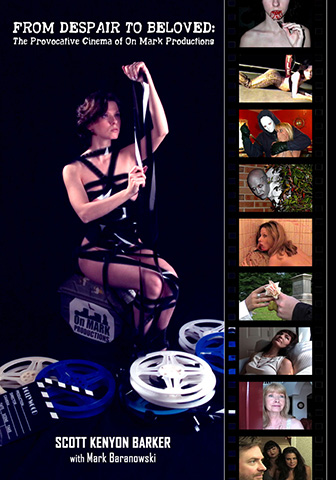 FROM DESPAIR TO BELOVED:
The Provocative Cinema of On Mark Productions

For personally signed copies direct from Mark & Ryli, order below!

In October 2001, a desperate screenwriter took the advice of actor/producer/director Bruce Campbell and shot his first independent movie, a short entitled Despair. With only a VHS-C camcorder, one location, natural lighting, two people (himself and his wife) and a rabbit at his disposal, he completed the film in two days. Two months later, it was picked up for worldwide distribution.
The screenwriter's name was Mark Baranowski. He and his wife, model-actress Ryli Morgan, would then come to be known as On Mark Productions, going on to make several more micro-budget shorts and feature films over the next ten years. Working with the likes of Brinke Stevens, Lynn Lowry, Suzi Lorraine and Teri Weigel, the couple became increasingly well known and respected within the realm of cult cinema. They've been featured guests at numerous horror film conventions along the eastern United States, while assisting in the productions of others, both on and off camera.
Co-written by Baranowski himself, From Despair to Beloved: The Provocative Cinema of On Mark Productions is the official guide to his entire film catalog thus far, spanning from 2001-2011. Each title is thoroughly analyzed and reviewed, beginning with Despair (2001) and continuing on to Ryli Morgan: Audition (2002), Runaway Terror (2002), The Zombie Room (2003), Expendable (2003), Sin By Murder (2004), The Powerful Play (2004), Heaven Help Me, I'm In Love (2005), Ill Times (2009), Mister Dissolute (2009) and Hardly Beloved (2011). Exclusive behind-the-scenes stories and photographs, shooting scripts, poster and video box art, ad mats, production stills and cast recollections make this book an exhaustive and invaluable resource for not only fans of Baranowski’s films, but for anyone interested in true DIY movie-making.

SCOTT KENYON BARKER is the Executive Editor for Tucson Lifestyle magazine, Tucson Lifestyle Home & Garden, and a frequent freelance contributor to several film publications. He began writing at an early age, and sold his first short story to a national magazine soon after high school. While attending The University of Arizona where he studied theater, he continued writing, and began selling magazine articles to regional, national, and international publications. He has won awards from the Arizona Authors Association and the Arizona Press Club, and has taught magazine writing for Pima Community College (where he is an adjunct faculty member) and Tucson Open University. His screenwriting efforts began in the mid-'80s, and by October 2013 he had completed 12 screenplays, which include a TV pilot, several action thrillers, horror movies, and an indie-style drama. Several of his screenplays have been competition finalists, and he has been invited to pitch to major studios.
He was the co-writer and co-producer for From A Place of Darkness, with John Savage and Natalie Zea, now available on Blu-Ray. He was also the writer/director and producer for Dead On Site, released on April 5, 2011, by Acort International/Maxim Media, and is currently in post-production on the horror/martial arts feature film, The Z. In 1994, he was contacted by Globe Pequot Press to write a travel book - "Arizona Off The Beaten Path." He also has ghostwritten for an industrial psychologist, as well as contributed the text for a photo essay book about Tucson. The summer of 2003 saw a return to his roots in literary fiction, as he served as co-editor and contributor with Rhonda Baughman for the short story collection, "Quietly ... But With Force".

MARK BARANOWSKI is a multifaceted artist and the head of On Mark Productions. Beginning with drawing while still a child in his hometown of Buffalo, New York, his creative pursuits would later include song, book & screenplay writing, and then film-making. While honing his talent as a charcoal pencil artist, he recorded a wide range of music under such names as The Marksman, and Marquis. In 2000, he self-published a novella, "Tartarus, Book 1: Lot’s Phantasms," and a collection of lyrical poetry, "Words Seeking Music". His second screenplay, which he wrote as a potential vehicle for Jean-Claude Van Damme, awarded him the services of a Hollywood manager, while his spec sequel to John Carpenter's The Thing caused quite a stir at Universal Studios. However, when nothing became of either, he vowed to neither waste any more time or to rely on the "studio system" to achieve his goals. To this day, he has no regrets for making this decision.
A masochist at heart, he now willingly resides in Charlotte, North Carolina – part of the Bible Belt – where his films remain privately enjoyed by the same people who criticize them publicly.


Read an excerpt from the book at Indiewire.com

Article about the book from The Charlotte Observer