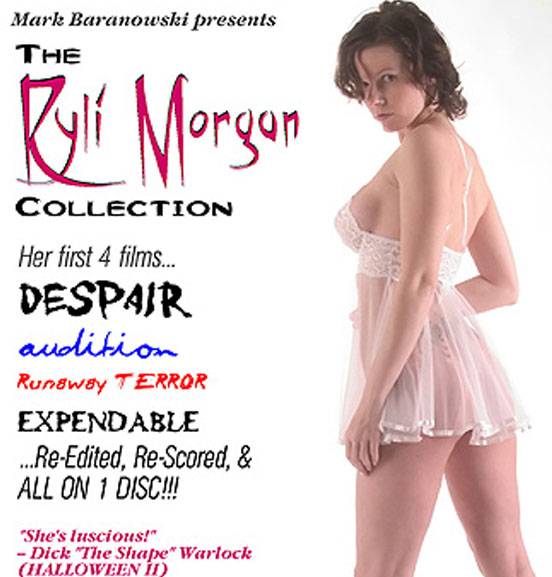 Despair (2001)
A married couple's final hours, before each commits suicide. Christopher (Mark Baranowski) no longer wishes to live a life in which his artistic talents continue to go unrecognized and unappreciated... Yvette (Ryli Morgan) has no desire to live without him, and her depression drives her to both insanity and self-destruction.

Ryli Morgan: Audition (2001)
Recorded before a blue screen and between the ropes of a boxing ring (!), Ryli SIZZLES while she struts, sways, strips and SO much more... JUST FOR YOU!!! Watch, mesmerized, as she slides and wiggles her way out of three tantalizing outfits... each time more revealing than the last!

Runaway Terror (2002)
A shady producer begins losing his actresses to a knife-wielding, masked killer. A detective teams up with the twin sister of the first victim (both played by Ryli) to search for the culprit, as both the list of suspects and the body count grows...


"Takes the slasher formula and works with it in the right way..."
- HORROR-DOMAIN.com

Expendable (2003)
David is a newly sold-out drug dealer who decides to pay his ex-wife, Nicole (Ryli Morgan), a surprise visit before leaving town with his new girlfriend (Brinke Stevens)... only to discover that Nicole isn't the same person he knew when he left her, a year ealrier. She now has a girlfriend of her own, and David sooon realizes that some things are better left in the past...